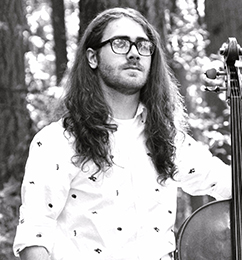 Ramsey Sadaka (b. 1991) is a Vancouver-based composer, cellist, and conductor, as well as an executive board member and secretary for the Vancouver Pro Musica. His compositional practice deals with the colorful interplay of finely sculpted textures and a harmonic palette that uniquely blends diatonic and chromatic elements.

Sadaka’s music has been performed internationally at many prestigious new music festivals, including New Music on The Point, the Sonic Boom Festival, the highSCORE New Music Festival, the University of British Columbia’s Bang! Festival, the Oregon Bach Festival Composers Symposium, the University of Oregon’s Music Today Festival, and The Ohio State University’s New Music Festival. He has collaborated with such musical luminaries as soprano Estelí Gomez (of the Grammy Award-winning ensemble Roomful of Teeth), members of the JACK Quartet, the Vancouver Symphony Orchestra, Nu:BC, the Quartetto Indaco, Chamber Brews, and the Columbus Ohio Discovery Ensemble. His work has also been generously funded by the Johnstone Fund for New Music and the University of British Columbia’s Belkin Art Gallery.

Sadaka is currently pursuing a doctorate in composition under the auspices of a Four-Year Fellowship at the University of British Columbia, where he has studied with Keith Hamel and Dorothy Chang, and serves as a teaching assistant for the university’s Contemporary Players ensemble. Sadaka received a Master’s degree in composition from the University of Oregon, where he studied with Robert Kyr and David Crumb, and served as a Graduate Teaching Fellow in composition and a co-director of the Eugene Contemporary Chamber Ensemble. Sadaka also received a Bachelor’s degree in composition and cello performance from The Ohio State University, where he studied composition with Donald Harris, Jan Radzynski, Thomas Wells, and Marc Ainger; cello performance with Mark Rudoff; and served as an undergraduate teaching assistant and president of the university’s New Music Collective.