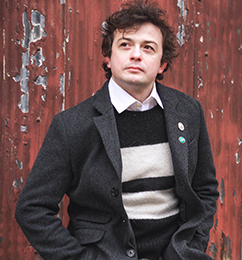 Jiří Trtík is a Czech composer and conductor. He is currently working towards his Master of Music degree at the Cleveland Institute of Music in the studio of Keith Fitch. He has studied composition and conducting at the Prague Conservatory.

Jiří has received a number of commissions and performances from world-class artists and ensembles, such as members of the Metropolitan Opera’s Lindemann Young Artist Development Program, Grammy Award-winning Cleveland Chamber Symphony, Kühn Mixed Choir, and the principal cellist of the Cleveland Orchestra, Mark Kosower. His works have been performed in the Czech Republic, Slovakia, Germany, Latvia, United States, and Japan.

Jiří has also composed music for several movies, such as The Hunch, Zelená Vdova, and Jdi dál. He has participated in several international master classes, including Vocal Espoo in Finland and International Composition Masterclass in Latvia, both in 2014.

As a conductor, he has led performances of Mozart’s Requiem and B. Martinů’s Opening of the Wells, as well as premiering choral works by several young Czech composers.

Jiří studied philosophy at the Charles University. He writes a blog about music and also organizes benefit concerts.

Jiří Trtík was honored to be the first-prize winner of the Cleveland Composers Guild’s Fifth Annual Collegiate Composition Competition in 2018, and the WCSMS 2018 Promising Young Composers Competition. He was also honored to receive the 2018 Donald Erb Prize in Composition.